Decided to spend a little time with my high school best friend today! Since we haven’t met for a while… And we kinda decide to go somewhere new for lunch.

We went to a placed called Pickle and Fig (you can see their logo on the pic above). It’s a local restaurant apparent “Instagram-worthy” I found in an article (that I won’t link sorry; lost it :s). We gave it a go since we decided to try something we both haven’t been before and drove there. The ambience of the place is quite simplistic, nothing too nice. To be honest, the place looks better in the article. So that was a little disappointing.

The food was okay, I guess. But, not really worth the money. It’s a little pricey, the food they have there. Anyway, I wasn’t really hungry when I got there so I had an avocado salad, which I can honestly say was a little sad. Maybe it was my fault for just ordering an avocado salad… I also ordered a drink called “Go-Peachy” (can u spot it in the wall menu??), it’s a mix of 3 fruits I believe, one of which is peach obviously. So, the two things I had went up to RM30 (USD 7.50). Note that it was 30 bucks for me in my currency (I know, the exchange rate is crazy).

We also spent quite a long time in the cafe, cause my boyfriend and I decided to get my friend an impromptu gift; she’s Hello Kitty crazy. And when I saw there was this DIY Hello Kitty Perfume Set, I just knew I had to get it for her! Surprise, surprise, she loved it! So, that was fun… Making perfume in a cafe. Hah.

When it was time to leave, Zac spotted a cat cafe! Right above the cafe we were in. I’ve seen about the place before on Facebook, but never really had the chance to go. So, we just had to go! We excited ran upstairs to check it out. So, when going in, I spotted about 20 cats or something. There were a lot of cats, and Zac was just estatic (he’s a crazy-cat-man, just saying). 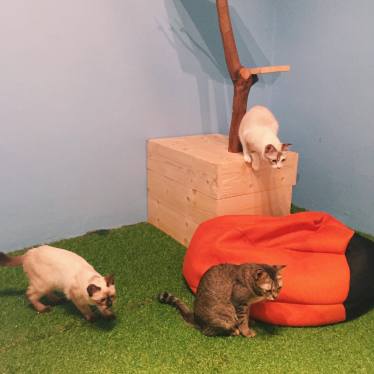 Here are some of the cats I’ve taken pictures off. The place was very cute! But, I forgot to take more pictures of the surroundings. HNgghgH. Anyway, they charge RM15 (about USD 4) per hour to play and whatnot with the cats, which comes with a drink. So basically you’re buying a 15 ringgit drink to play with cats for an hour, which I would say is pretty affordable! It was really fun. 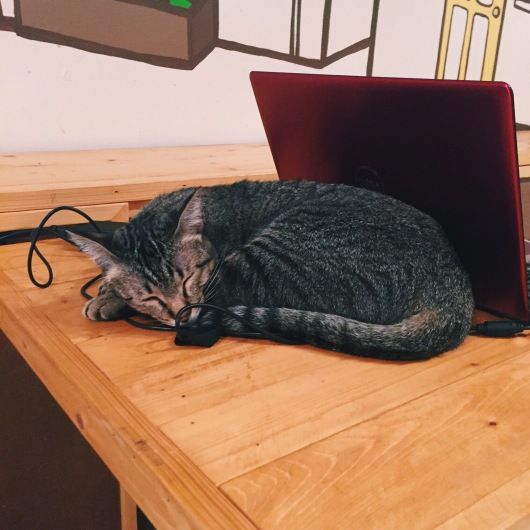 When we were about leaving, Zac told me he wished the owners took better care of the cats. And, I told him they do! He was referring to some (cats) that looked like they were half blind. And, so I told him the reason…

This is the best bit about the cafe: the cats were actually adopted from the streets by the owners after they were found by a local rescue team. All the cats there were abandon before and was probably living in bad conditions on the street. So, it was really nice to know that all the cats were adopted. Thus, it explains some scars and imperfections some cats may have. But, they were all very lovely, I have to say.

Have you been to a cat cafe? Are there any local “Instagram-worthy” cafes you liked/been to/near you? I’d love to know! Tell me in the comments below~

Also, would you like me to make a series of stuff/places I enjoy going to in my country? I think that’s a pretty fun idea.

Anyway, that’s all for now. Hope you had a lovely day!

My name is Sylvia and I like writing about beauty products to give you insight of what I think of them and other lifestyle topics.